How Has Chicago Prepared for Flood Scenarios in the Future? 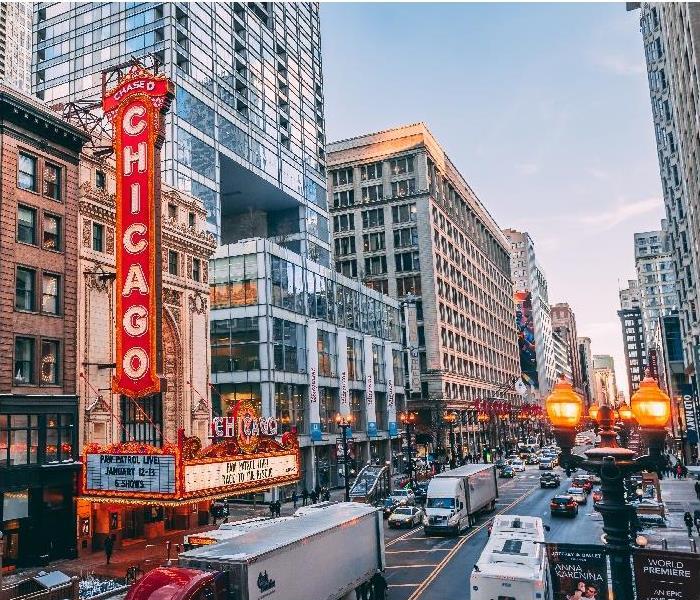 Even a city like Chicago can be impacted with storms and floods. SERVPRO continually trains for these events and is always prepared.

As the third-largest major city in the United States, it is no great surprise that there is an ever-present need for professional restoration in Chicago. The positioning of the town and its outer lying areas alone allows for the continued threats of flooding and storm damages, which can be even more accentuated by harsh weather conditions expected during the worst of the winter and summer months. The Windy City might be known for strong gusts against its well-constructed buildings, but it must also survive a gauntlet of terrible weather conditions like cyclonic storms, torrential rains, hail, and blizzards. The present threat of flooding encourages city engineers and structural designers to provide modern solutions to protect the city and its residents.

A History of Flooding in Chicago

Much like every major city in the country, Chicago has not always had the most positive history. While a great fire in the 1800s is the disaster the city was most recognized for, flooding has always been a plague for the area. Because so many creeks, streams, and rivers converge in and around the metropolitan area, Cook County remains an area likely to experience damages from flash flooding, groundwater, and human/structural failures. No time would this be more relevant than the flood that damaged the city in 1992.

To this day, the individuals at fault have never been exclusively identified, though the cause has been. Repair work on one of the city's bridges over the Chicago River inadvertently damaged a utility tunnel underneath the river. Once an opening existed, more than 250 million gallons of water would make its way into nearby basements, structures, the Chicago Pedway, and the Chicago Loop. As a trusted remediation and restoration team, SERVPRO can help customers through situations like these when they happen now.

Ultimately, this human error would lead to a 2-billion-dollar cleanup and restoration drive for all of the affected and damaged properties in the path of the water. Even the repair of the tunnel's breach would be an elaborate process, only becoming successful by applying a superior concrete. If it happened today, 1992's $2 billion to repair the impacted structures would be much closer to $4 billion dollars. With no one directly taking responsibility for the disaster, repair costs and restoration bills were footed mostly by property owners and insurance companies.

Steps Taken by the City to Avoid Catastrophe

Much work is necessary to prepare Chicago for hurricane-level storms thoroughly. Situations like Hurricane Harvey that devastated Houston, TX in 2017, would become a catalyst to locations like The Windy City to do better for storms that might be in its future. Chicago itself is a feat of engineering to manage wastewater, stormwater, and drinking water. As it stands, the most significant contingency that Chicago has to manage flooding is TARP (the Tunnel and Reservoir Plan.) Deep Tunnel, as it is more commonly known, is a network of wastewater tunnels designed to redistribute water to substantial reservoirs that can handle shy of 20 billion gallons.

Considering that Hurricane Harvey unloaded close to 20 trillion gallons of water in its five day run on the land, Deep Tunnel could not handle a storm system even partly that strong without overwhelming the city's infrastructure. Comparing it to one of the worst storms that Cook County has experienced in the past 50 years that would have had the municipality managing 124 billion gallons of runoff, TARP cannot handle this water volume. As such, engineers are currently working on feasible solutions to protect better Chicago and its residents moving forward from threats that might be coming in the years ahead.

High-rise structures are designed to be among the most stable and permanent systems in the world, reinforced with steel and concrete. These construction elements can be calming when flooding has impacted lower levels and the building's main floor. In many cases where flooding occurs, apartment owners and renters do not have to vacate the premises provided that risks of contamination like bacterial or viral pathogens do not exist.

Structural evaluations must typically occur to ensure that a decision to stay in your apartment after flooding impacts other floors does not ultimately damage your unit. The same concerns exist when apartments above yours become threatened by penetrating water through the building's roof.

Many residents have purchased or leased apartments in the high-rises throughout the city's downtown area and various neighborhoods. Flooding in Chicago apartment buildings requires an immediate response from competent restoration professionals like our SERVPRO team to prevent the situation from worsening. Water can spread rapidly, especially when the flooding gets into open structural cavities in shared walls, between floors, or in other spaces. The appropriate response reduces the number of apartment units impacted by flooding.

Assessing the structural damage is critical to determining the extent of flood damage to an apartment. Often high-rise buildings can only suffer damage to upper floors through roof vulnerabilities that allow water penetration. Our team's in-house contractors can perform emergency services like board up and tarping when we first arrive to make mitigation efforts as efficient as possible. Once repairs have taken place, SERVPRO professionals can evaluate the spread and severity of flood losses through discovery tools like thermal imagery cameras.

When water removal services are required, we rely on several tools to get this job done. With upper floor flood damages to apartments, extraction becomes a complicated process. High-pressure pumps can be the ideal choice for their long-range and powerful output in many situations, making them suited for higher elevation operation and even subterranean extraction efforts.

Flooding does not have to be devastating to your apartment. Give our SERVPRO of Evergreen Park / South Chicago City team a call today at (773) 337-3900.